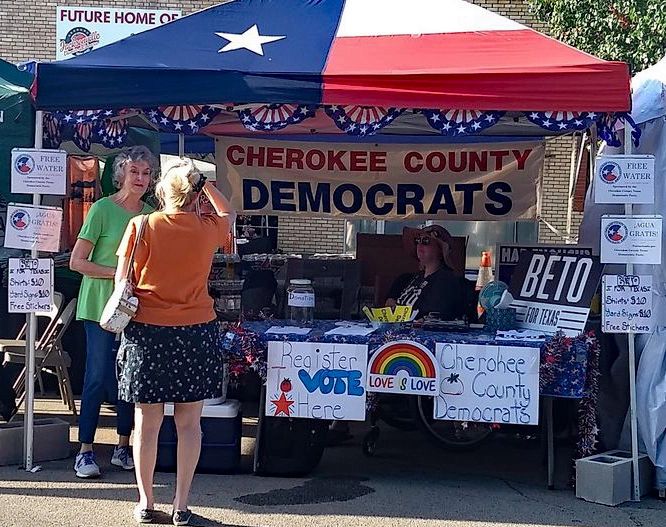 The 38th Annual Jacksonville, Texas Tomato Fest was not the same observed from the Cherokee Democrats Club and Party's booth as in the past three years.  Last year we provided cool water, as we did this year to Tomato Fest goers.  People obviously caught the Democrat's idea as others, including our rival Party, Republicans added free water to their draw.

On the table pictured we offered the general platform concerns Democrats voiced; Democracy, (Voting rights, transfer of power), Climate (Energy and related effects.), Women's Rights, Firearm Safety and Healthcare.  Also, voiced from the booth inclusion of LGBTQ, Education, positions held by Democrats.  Even today we watch as the January 6th U.S. House of Representatives conduct the committee's disclosure of how close our country came to losing the ability to transfer power.  No, it is not the same.

Not all were so welcoming or inclusive.  A young man approaches the booth and gives a "F" word to the group.  A few came to express their opposing opinions on issues, they were welcomed, and we listened.

What was so much "not the same".?   The cross section of people that came to express their support and for some outrage at conduct and inaction.

Democrats understand that Cherokee County, Texas is as "Red" as it gets.  So, as some have expressed, "Why waste your time?"  When only one-party controls absolutely, corruption becomes ripe, no compromise is required, and inaction for the general welfare falls to the wayside.

The Cherokee County Democrats give choice, guard freedoms, support the Constitution, and stay the course for the interest of our Texas and the United States of America.  The attempted denial of the transfer of power Republicans and radicals orchestrated is not the same.

Copyright © 2022 Cherokee County Texas Democratic Party - All Rights Reserved.  POL. ADV. PAID FOR BY MICHAEL OUSLEY AND AUTHORIZED BY COUNTY CHAIR JANICE THACKER..  NOT AUTHORIZED NOR ENDORSED BY ANY CANDIDATE OR CANDIDATES' COMMITTEE.  IF YOU HAVE QUESTIONS ABOUT THIS WEBSITE, CONTACT WEBMASTER@ODOT.US